Hurricane Henri weakened and hit Rhode Island as a Tropical Storm on Sunday. The storm stayed further east than originally anticipated and for the most part Berks received just rain. The rain was heavy depending on your location with radar estimates shown below. The Northeast part of the county received the most rainfall although there were some localized areas with higher amounts. The radar is showing 2 to 4″ for that area, but I’m not finding any readings over 2.5″ so the radar estimates may be a little overcooked.

The station recorded 0.99″ of rainfall with most of it coming from 10 PM Sunday through 5 AM Monday morning. This heavier rain was wrap-around precipitation from the semi-stalled Henri. Following a somewhat dry April through June both July and August have rainfall totals over 7″ bringing our yearly total back to average. The rest of this week will be Hot and Humid with some relief coming this weekend.

8/11 – The temperature reached 91 °F with a maximum heat index of 109 °F before storm clouds rolled in curbing a higher maximum. The 2nd day of Thunderstorms started around 6 PM. Radar indicated hail just to our West, but none was observed at the station. Wind gusts reached 35 mph and rain came down in sheets with various intensities. The rain ended around 8 PM and the official total was 0.95″ bringing the station total to 2.89″, nearly an inch above average for the month to date.

This picture facing the Northwest shows ominous storm clouds and even rain well in the distance. 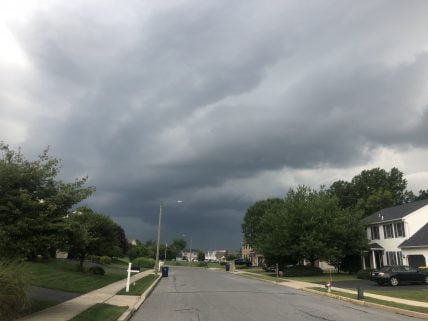 END_OF_DOCUMENT_TOKEN_TO_BE_REPLACED

Wednesday started off quiet with light winds and hazy skies from the Canadian wild fires, but by early afternoon that quickly changed. A T-Storm complex approached from the West around 2 PM. This first round brought wind driven rain with gusts nearing 40 mph and peak rain rates of 9″/Hr. The storm total was 0.6″ in approximately 20 minutes with just minor damage such as small branches ripped from trees.

The 2nd round of T-Storms arrived from the Northwest and struck just prior to 6 PM. Radar echoes depicted possible hail and for approximately two minutes we received mainly pea sized hail with a few marble sized hailstones. The peak rain rain hit 10.4″/Hr, but this round did not last as long as earlier. The storm total was 0.39″ and the hail melted very quickly.
END_OF_DOCUMENT_TOKEN_TO_BE_REPLACED

A hard to forecast winter storm is approaching our area yet again. The storm will arrive very early Thursday morning and will be with us until Friday afternoon. The current model blend is predicting 5 to 9″ of snow and sleet for Berks. The storm will start out as all snow and could be heavy at times before mixing occurs. This is a highly volatile situation so it could be updated several times before the first flakes hit.